The Academy was originally started by 3 Fire Departments within Jefferson County, Fern Creek, Buechel and Highview Fire Districts. Jeffersontown Fire later joined in 1992.  These agencies had an idea for a place where all departments involved could come together and train. In September of 1995, an offer was made for the 78 acres on Fairmount Road where we currently operate.  After several counter-offers, the deal was approved and the Fairmount Road property became the Academy site in November of 1995.This facility has gone through many changes over the years and has grown to be one of the most well known facilities in it's region.

The Academy is managed by a Board of Directors which consists of one member from each department involved. There are 14 agencies to date who all actively participate in training activities.

Throughout the past 2 years the facility has added a state of the art Search and Rescue Drill House(video link on Home page), a new Ventilation Prop and combined Flammable Liquids/ Car Fire Prop. 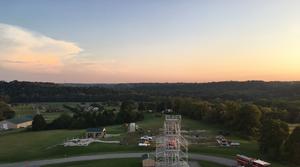 Our monthly trainings are held at the Academy and the topics vary from technical classes to the core of what we do , Fighting Fire. These trainings are held the second Monday through Wednesday of each month and are done at 0900 hrs. and 1300 hrs. each day. There is also a night class held on Mondays for those Combination departments involved. This enables us to serve all members equally and for all neighboring districts to participate and get to know each other. Each class is instructed by the district involved and is usually someone different each month. The classes are held daily so that there is some consistency in the training and development of our personnel.